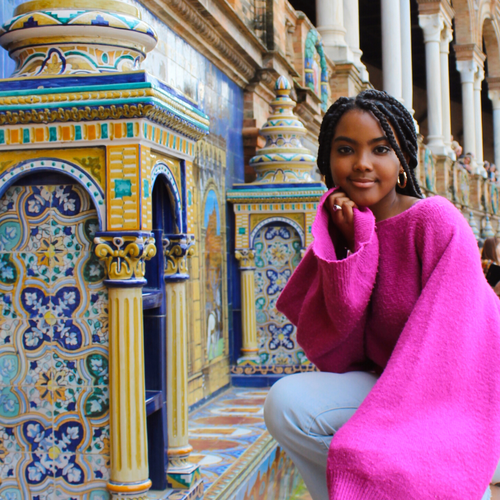 I have officially survived my first week as a study abroad student in Granada, Spain. Since my arrival, I have met people from all over the world and explored some of my new city. Granada is such a special place and I fall in love with the city more and more each day.

Studying abroad means so much more to me than just traveling the world. It represents an opportunity that I now have because of others that paved the way for me to do so. I recognize that it is a privilege, and something very few have the opportunity to do in their lifetime. As an African American woman, I wasn’t sure what to expect while studying abroad in Spain, but I challenged myself to have no expectations and to keep an open mind.

What I didn’t know when I selected Granada was that Andalusia, the autonomous community that Granada is located in, has such a historically rich and diverse culture. Many don’t know that Granada (then the “Emirate of Granada”) was the last seat of the Nasrid Dynasty and Muslim rule in Spain. Prior to La Reconquista, Granada and much of Andalusia was a melting pot of Africans, Arabs, and Jewish people. Over time, most were driven out following La Reconquista, but their influence holds a heavy presence. It is evidenced in nearly every piece of architecture, the cuisine, and the way of life here. From the Alhambra, to the Mezquita- Catedral in Cordoba, I can experience multiple cultures in one place and I’ve only brushed the surface. The diversity lies within more than just the people, but also in Granada’s diverse history that makes them different from the rest of Spain.

I feel a deep connection to this place and I am hopeful that I will gain a true understanding of this culture that is much different than my own. The diversity I bring is just as important as well, and during my time here, I hope to find more of my people to continue my journey with. There are some Afro- Spaniards in Spain, however not many, and stereotypes exist here much like they do anywhere. Cultural immersion is the first step in bridging gaps and initiating change. Sometimes it takes a person to step outside of their comfort zone and attempt to learn someone or something foreign to them, and I have wholeheartedly accepted that challenge.