As it was my first-time studying abroad, I was unsure what exactly life overseas would look like. The first few weeks were challenging in terms of adjusting to a new time zone, culture, and language. After a month of being in Tunisia, I was able to understand local Arabic called “Tunsi”. One thing that did shock me, in the beginning, was the usage of French in Tunisia. The official language is Arabic but I noticed French is used as the second unofficial language in the area. I had previously taken courses that focused primarily on Morocco and Algeria which highlighted the French colonization in those areas. I learned more about the history of Tunisia through my politics course at SIT that explained the reasoning behind the usage of French and heavy influences France has had on Tunisia’s society. I found that I could easily assimilate to Tunisian culture as it was similar to Salvadoran culture. I was widely accepted into the community as my appearance would be deceiving and many would think I was a Tunisian. 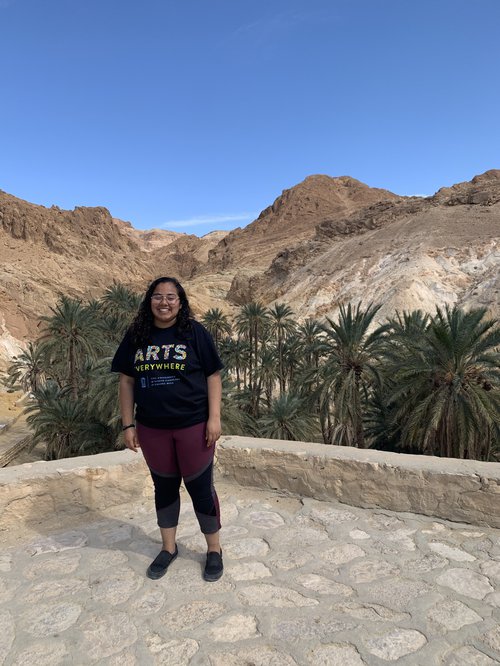 I learned so much more through my homestay as I was able to interact with different family members who practiced Modern Standard Arabic with me. I became familiar with local TV shows which I would watch with my family at night. My host family had various family members who visited that were living outside of the country due to limiting opportunities in Tunisia. This gave me the opportunity to try food from Saudi Arabia and Germany. I adjusted to my host family’s lifestyle very quickly and the Mediterranean diet. I expected more conservatism in the area, but quickly realized that people were very open to speaking about anything. I felt as though I was not in the Middle East, but rather in Europe. As the city's layout was very modern and similar to pictures I had seen of European cities. I never had lived near a sea and noticed that the wind is constantly blowing and affected the temperature and climate of the area. My favorite part of being able to sit on my rooftop and have a view of the city and sea all in one.

Reflecting back to when I was choosing a program, I recall wanting to go somewhere that is not often traveled to. I saw a curriculum being offered that would help me in future aspirations of working abroad for a nonprofit organization. I am interested in the North African region and saw this as the opportunity to immerse myself and learn more about the first democratic Middle Eastern country. In all, I have learned more about myself. I grew my knowledge in this area and realized being able to practice speaking Arabic has been very helpful. I have become more confident with my Arabic skills and made new connections abroad that will last a lifetime. I also became more aware of how much I can learn through experiential learning than just sitting in my classroom. Regardless of the COVID-19 situation, I still am glad that I was able to spend some time in Tunisia, which I now consider a second home.

Related Articles
Students of Color in Brazil
Students with Disabilities in Australia
The Learning Journey with Life Overseas
7 Strategies For Embracing Cultural Immersion
Does the Term African American Only Exist in the United States?
LGBTQIA+ Students in Costa Rica