When I went abroad this past spring, I had no intention of visiting the “developing world”. I made plans to go to New Zealand, Australia, and Fiji, where I was supposed to spend my time traveling, participating in hikes and extreme adventure sports, laying on the beach, and hanging out in a resort when I was not in classes. And that is exactly what happened, until I got to Fiji. When we got off of the plane at 5am local time, it was very apparent that this was no “sit by the beach and walk down the pier of the ocean to your exotic resort room” country. There were wild boars on the runway at the airport, we passed through remote villages with homes made out of corrugated tin and sitting atop cinder blocks, and there were only a handful of places with air conditioning in the capital city. Yes, I should have done my research about Fiji and realized that it was a developing nation, but I am actually glad that I didn’t. 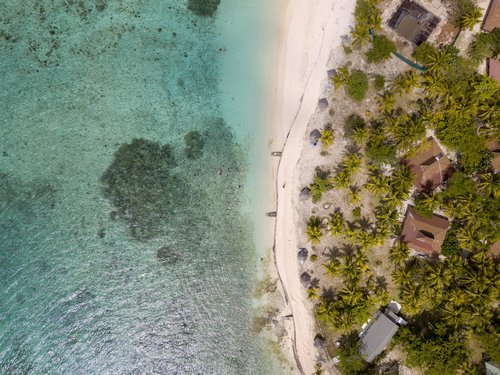 During my two weeks in Fiji, I learned so much from the Fijian people. Their stories, were shared over lovo cooked meat, kava, and natural fruit juices. I learned about their strong faith and why they relied so heavily on God to provide for what they had, which in turn affected my personal faith. I learned about their schools and why it was so important for their children to know about all types of flora and fauna. This made me realize the importance of practical education for young, impressionable students. I learned about their daily routines, and discovered that they are much more disciplined about brushing their teeth three times a day; more than any American I knew -- and I have friends who aspire to be dentists!

It was beyond humbling to spend two weeks living in a part of the world that challenged my perceptions of what it means to be poor, especially since we arrived only a few weeks after Cyclone Winston swept through the majority of the country and took down trees and ruined the power grid. There were times when internet wasn’t accessible at the resort, and plenty of occasions where there was no electricity, so no one could study with their laptops or review PowerPoints and PDFs without their batteries dying. When we were in Fiji, the final village I visited was getting electricity for the first time ever. When I heard this news, I realized how trivial it was that I was worried about not being able to download everything off of my go-pro before my next dive because the power was down. There were people only a few hours away that did things at night via candlelight and had never owned a refrigerator. Talk about humbling.

And while it was a humbling experience, it also taught me that there are ways to go to developing nations without having to “save” the people there. The Fijian people were quite literally the happiest people I have ever met, and by far the kindest. One family opened up their home to a few friends and me to teach us about their culture and to have a traditional kava ceremony. When you walked around the capital city of Suva, everyone was smiling and were so very helpful. These people were also some of the most adaptable innovators I’ve ever met. For example, the local village in Deuba taught us how to put up rugby goal posts using rope and two boards of wood fastened like a cross; an idea that would have barely crossed anyone’s mind in the western world.

The single most important thing that my experience in FIji taught me was that everyone is human. People talk differently, have different food tastes, share different passions, are exposed to different privileges and call different places home. Going abroad gave me the insight to see this firsthand, something I may never have known if I hadn’t gone abroad.

Related Articles
Tips for Maintaining Language Fluency When You Return Home
A Student Perspective on the Global Student Leadership Summit
Learning Beyond the Classroom in Cape Town, South Africa
Tips For Dealing With Reverse Culture Shock When You Return Home
What Student Protests Tell Us About The Need For Diversity And Cross-Cultural Understanding
Considering a Graduate Degree in Education