What does it mean to be African American? Speaking from personal experience, being African American means being Black and being born in America. For those who were born or grew up in Africa and are currently going to school or living in the U.S., they would consider themselves African first, American second. For example, a young person from Nigeria may not identify as African American, but instead as Nigerian American. For those of us not exactly sure about how we self-identify outside of the U.S., I had to ask the question: Does the term African American only exist in the United States? 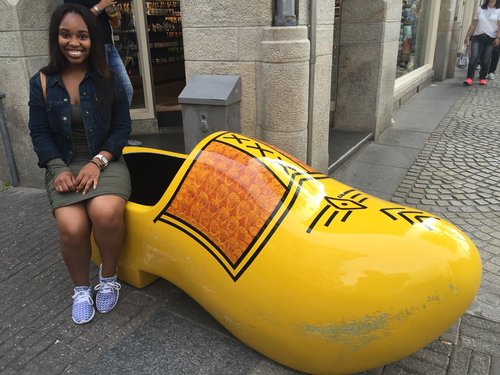 While I was in the Netherlands for 5.5 months during the spring 2016 semester, I was often asked where I was "really" from, because saying “the United States” never seemed to be good enough. I had to be from Africa; if not me, then certainly my parents. If not them, then my grandparents and so on. When I respond by saying that my parents, grandparents, great grandparents and so on are also from the United States and not Africa, I experienced what appeared to me as dirty looks. So my question evolved from “What does it mean to be African American?”, also, “What does it mean to be African American around the world?” My experience made me believe that “African American” is specifically an American concept, and that it may not be taught outside of the United States.

I was continuously asked where I was really from after telling people I was from America, and from the very first moment it happened I struggled with unpacking that experience. I struggled with how that made me feel, how to discuss it, how to interpret it… I just struggled. Honestly, I still don’t quite know what I felt from those particular encounters, but I do know that I learned a lot about others and myself.

What I learned from being asked where I am “really from” is how important it is to travel. When you study abroad, you can immerse yourself in a culture other than your own. At the same time, you’re also able to teach people from around the world about you and your lifestyle. Studying abroad broadens your horizons, and by educating others about yourself, you are strengthening your understanding about yourself, just as others gain a clearer understanding of themselves when teaching others about their culture. After more than five months in the Netherlands, I left knowing more about Dutch, Slovenian, German, French, and the cultures of all of the people I engaged with, in cultural conversations. What I didn’t expect was that at the same time, I learned more about American culture and myself in general.

While you are abroad, you may experience encounters similar to mine, or your experience may be completely different. No matter the experience, embrace it. Try to learn from every encounter and experience, and allow yourself to grow. If being asked where I was really from didn’t do anything other than what I stated above, it made me realize that answering specific questions, even about myself, is not as easy as I thought.