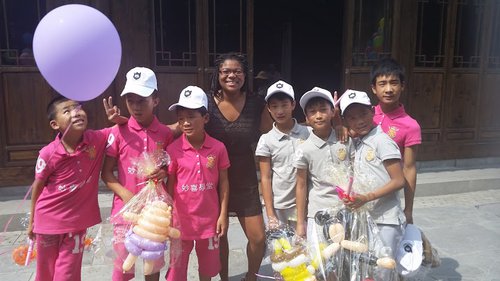 I decided to study abroad in order to learn about the Chinese culture and to learn Mandarin Chinese from the source. I also wanted to study abroad because I thought it would be a great learning opportunity and since the funds are available, why not?

I went to Chengdu, China through the United Studies Abroad Consortium: Chengdu Program. I lived in a student dorm at Southwest University for Nationalities. I studied Mandarin Chinese, Calligraphy, and Sichuan Cuisine. There was also opportunities to volunteer, which I did. There were also multiple field trips to the Panda Research Center, Leshan and Emei Shan mountains, Qiang Minority Village, Qingchen Mountain, Dujiangyan Irrigation, and the Yellow Dragon River.

I paid for my study abroad with scholarships (I only paid for my own plane ticket) including the Benjamin A. Gilman International Scholarship and the Beyond Boundaries Award.

I wish I had known that some people don't know what they're talking about when they talk about other countries and their people, you definitely need to do your research and go to the country with patience and an open mind.

I did experience some discrimination being a black woman in China. I was stared at and photographed. People assumed that I was from Africa even though I stressed that I was American. I learned to have patience and to realize that not everyone has had the same advantages or experiences that I have had and I shouldn't assume that everyone knows what I know.

Studying abroad has benefited me academically by allowing me to learn Mandarin Chinese, Chinese culture, and problem solving in different environments. Personally, I have learned patience, compassion, and gratefulness. I also learned the importance of learning, understanding, and experiencing other cultures in this increasingly globally connected world.

The most memorable moments of studying abroad was the lifelong connections I made with other American students and the Chinese people that I still talk to.

How was the entertainment and nightlife?

The entertainment and nightlife was the best! It was so cheap! Because there was so much public transportation, it was easy to get everywhere. We went to the largest mall in the World, the movies pretty much every weekend, to clubs, and we had a favorite bar that we wrote our names in and went to every Thursday, Friday, and Saturday.

Study abroad has prepared me to work in an environment with Chinese people because I can now speak the language and I can slightly relate to them because I learned so much about the culture (including pop culture). It has also taught me how to think quickly on my feet and how to respond to difficult situations with problem solving skills.

Would you recommend the program you went on, if so why?

Yes! It was a great way to make friends and connections while really learning about the Chinese culture and the language from the people. Also, it is one of the most affordable study abroad programs I have seen.

Do it! Do whatever it takes to utilize this opportunity, it will be one of the best things you ever do. There is something for everyone.