The only things I saw about South Africa prior to participating in the Crafting Change Agents program were either images of townships or rich white individuals indulging in life. This trip was really the key to exposing me to a reality of South Africa that obliterated my expectations. 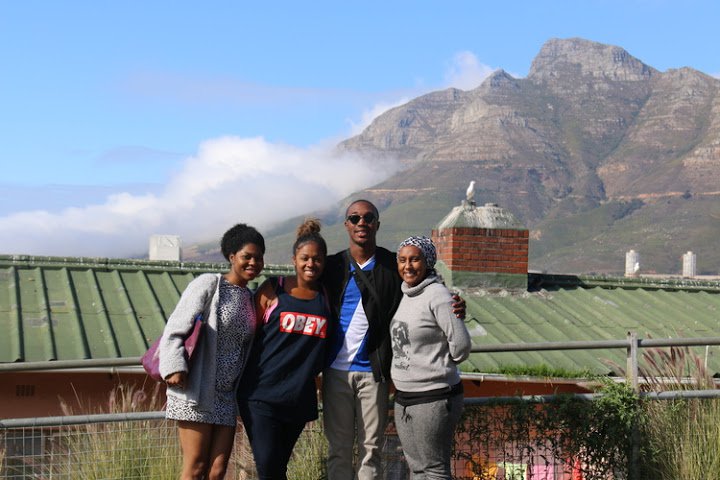 As the final days before my departure from the United States approached, my excitement heightened for my first interaction with my new host family. I anticipated learning and partaking in their cultural norms for a week. When I finally arrived in Cape Town, after a grueling 24 hours of travel, the natural beauty of the mountains and ocean that was visible even at 1:00am surprised me. The winding roads above the vast city lights was something I didn’t expect to see—it was a part of Africa not stricken by poverty, but bustling and booming like any other metropolitan city in the world.

In our thirty-minute ride from the airport as a group, I couldn’t get over the fact that I was riding on the left side and someone was driving on the right! In the US it seems we can only imagine this through movies or stories from when our friends go to the United Kingdom or other former British colonies. At any rate, I knew if that little aspect got me excited, I couldn’t wait for everything else.

We pulled up to the Cape Malay community of Bo Kaap a charming, yet removed, section of Cape Town. I didn’t know it then, but Bo Kaap was known for its exhausting hills and breathtaking views of the city. The apartments and homes seemed to be hanging off of the cliffs, holding on to each tether of grass and piece of earth. I considered the homes to belong to lower-middle and middle class dwellers at first glance. In the moment I began to judge my new outside environment, I quickly reminded myself to not equate my new surroundings to the people I was about to meet.

As I entered the first floor of the apartment, I was honestly relieved and thanking God that I did not have to climb up four flights of stairs with my luggage as I did in past experiences. It was a bit dim and rightfully so since it was roughly 1:30a.m. I was simply eager to get to a bed.

Before I caught some shuteye, Mr. Adams, my new host father, welcomed me into his home and assured me that I was one of his sons. He said, “You live in this house now. Anything you need, feel free to help yourself to it.” For anyone who has lived in a homestay with welcoming host parents, that it is almost the cliché mantra that host parents typically use to make you feel comfortable. However, you know all too well that it may take a few days to really get acclimated to living in someone else’s home.

I lay my head down, listened to some gospel music, and once again thanked the Lord that I made it across the Atlantic Ocean to South Africa safely after three extensive plane rides. Even though I travel frequently, I always get a bit weary after four or more hours of travel.

The next morning I woke up after about six hours of sleep and Mrs. Adams, his wife, emphatically greeted me. At the breakfast table, she gave me the option of eggs, orange juice, toast, milk, fruit, and coffee. As I grabbed pieces of toast, poured my OJ, and settled in my seat, she began to speak about her faith and the principles that guide her life as a Muslim. The crumbs from my toast that I was devouring aimlessly fell on my lap as I listened closely and absorbed Mrs. Adams words.

In the States, most people tend to be a bit reserved about discussing sensitive topics like religion that guide one’s identity. Though, in a new place, I encouraged myself to be open to what she had to say. She expressed firmly that Islam is a religion of peace first and foremost. What the American media portrays Islam to be is not what Islam is.

For the rest of the week, I engaged in more conversations with the sons—my newfound brothers—and simply observed their religious practices. The most impactful part of the experience was being present for the final call to prayer on my second to last night in the home. Mr. Adams explained to me that the call to prayer is a reminder that Allah exists and we are reliant upon him to guide and care for us throughout the day. Although I am Christian, I interpreted the call to prayer as a way not only to communicate with God, but also to be present in my acknowledgment of his existence. Furthermore, without his presence, I would be nothing.

With the mountains as a backdrop to my right, and the ocean waves crashing onto shore on my left, I thought to myself that there must be a greater power for all us this to be. Partaking in silent reflection five times a day is something I wished to incorporate into my daily life from that point onward.

In a deeper reflection of what my Christian faith means to me, I realized that I have been unfair to others who choose to express their own faith differently. In the case of Muslims, I made them out to be “perfect people”—individuals who must never stray away from the religion— and that is unfair. The fact is that on a daily basis, I act in ways that are not consistent with the Bible’s teachings. Am I condemned to hell because I sin? No, because I ask for forgiveness in the same way that followers of the Qur’an do.

One last observation I made was the respect of the community. Mrs. Adams shared that in the Bo Kaap, people always say “salaam” when passing by. Even if you’re using the phone or busy with another task stopping to say, “salaam” is a way of acknowledging another human beings presence. At home, I think that, too often, I lose track of that and it challenges me to acknowledge others humanity more.

Since returning to the United States, I continue to actively reflect on my week in Bo Kaap. That week consistently teaches me lessons on how to be a better person. It’s amazing how leaving my native environment, whether it is the language that is spoken, the religion that is practiced, or the food that is consumed, never fails to teach me so much about how to better operate in my home country and in the world at large.

Related Articles
Achieving Career and Personal Goals in South Korea
Tips for Women Students in Brazil
Students of Color in Spain
The Journey Before the Journey: Finding the Right Program
Giving New Experiences a Chance
From Apprehension to Life Changing with K'Yanna wesley