While my situation isn’t unique, I would say that it’s also not the typical study abroad experience. I’m spending the year abroad, but in two different countries--Japan and Ireland--participating in two different programs.

One of these contrasts is learning style. This fall, I studied at Nanzan University in Nagoya, Japan; this program was direct enrollment, meaning that I attended the university as a student of that university and took classes with students who were not a part of my study abroad program. I got to meet people from all over the world, and had the opportunity to experience what a more typical curriculum might be like at a Japanese university. (There were some differences in order to accommodate the needs of international students studying abroad at Nanzan, though.) 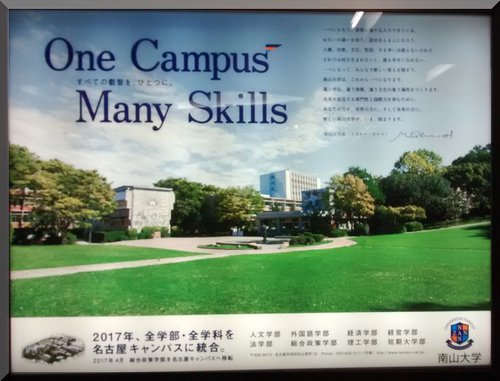 ’Tis the season for many things....including university entrance exams for high school third-year (the equivalent of seniors in the United States; Japanese high schools are three years instead of four). This Nanzan University poster can be found at the closest subway stop to the school.

The teaching style here is in some ways very different from what I’m used to in the United States. There, often more attention is paid to individual students’ needs through gifted programs, special needs, etc. Strong abilities are honed and allowances are made for students to learn at their own pace. In short, individualism is favored.

In Japan, on the other hand, uniformity and conformity are given greater importance. There are likely several reasons for this, but the result is that much of the evaluation in seminars and language courses is exam-based; what’s more, these exams are often structured around rote memorization. In some ways, this makes studying material easier, but if memorization isn’t one’s preferred learning style, exam preparation can be tricky. Some seminars and other lecture-based classes also have essay- and presentation-based evaluations as well, but language classes strongly favor the memorization method.

Art classes seem to be the exception to this evaluation rule. They seem to be more based on effort than accuracy. This makes sense, as it can be difficult to grade art in a standardized manner, given the individualistic nature of the subjects and the beginner-level skill set. Instead, one is evaluated based on the best work produced during the class period and how well one demonstrates understanding of the lesson material that day. This is a definite contrast to the art classes I experienced in the United States, in which I was expected to bring my work home to finish if I couldn’t complete it in class. There were also more specific instructions on what needed to be included and what would be evaluated. In some ways, American art classes felt stricter than Japanese ones; regardless, I will miss my Japanese art classes most when this semester ends. 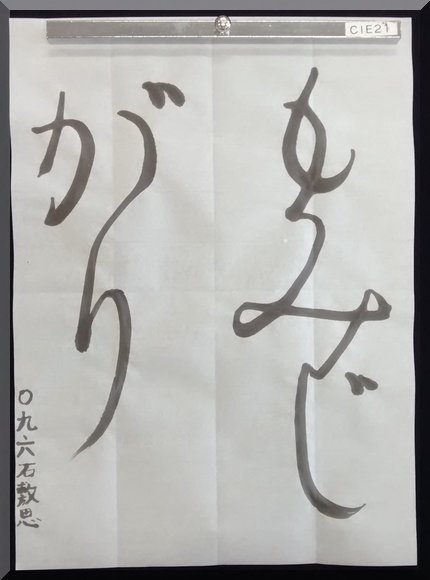 One of my calligraphy assignments. The text reads “Momijigari” (“Autumn leaves”).

On the other hand, Ireland will have its own class structures--which may or may not be different from Japanese and/or American ones--so I’ll have the opportunity to experience those as well. I expect to have a much more creativity-based semester and to get to know the students in my Dublin study abroad program very well. This is largely because the Dublin Writers Program is not a direct enrollment program. Rather, it’s specifically run by IES Abroad in an IES independent facility, so I will likely be mainly surrounded by other students in my program as opposed to the mixed groups at Nanzan. Still, I hope to use the study abroad strategies I learned in Japan while I’m in Ireland; this way, I hope to more fully experience the opportunities offered outside of the United States.

One of the most important things that I’ve learned about studying abroad is the value of being by myself. It’s very easy to slip into “Study Abroad Group Syndrome”; that is, I often spent most of my time with English-speakers or other international students. While I appreciated the commonalities between us and the friendships that I’ve made with them, I also think that spending too much time with only them produced occasional roadblocks to my language-learning goals. It became harder for me to find opportunities to practice my Japanese and to get to know Japanese students; they’re often as shy as I am, so they’re harder to approach when I’m surrounded by a group of English-speaking foreigners. I’ve been working through this challenge with the time that I have left in Nagoya; while I’m in Ireland, I intend to try and avoid this issue earlier in the semester so I can make the most of my interpersonal study abroad experience in Dublin.

Hopefully this experience will be a bit easier, as there will be less of a language barrier. While I hear that the difference in accents and slang might affect communication, as a language student, I look forward to these semantic and vocabulary differences.

As for being an Overseas Ambassador? I’d say that the best part is the photographs. I’ve taken hundreds, perhaps thousands, of photos during my semester in Japan, and I appreciated the opportunity to share the stories behind them. They’ve also been useful visual aids when explaining my weekend trips throughout Japan, and they show how much bigger my worldview has become. I appreciate the chance to do the expand others’ world views as well, even if it’s only through silly anecdotes of a rickshaw ride in Arashiyama Forest one rainy Kyoto afternoon.

The bamboo forest in Arashiyama. View from the rickshaw. Photo © Madeline Clark

All in all, while I would say that my first study abroad experience has been a mixed bag overall, if given the chance, I would do it all again in a heartbeat, but perhaps learning from my previous experiences. Although I’m excited for all the new opportunities and culture waiting for me in Dublin, I also know that I will miss Japan. One day, I hope to return to the home I’ve made for myself here.